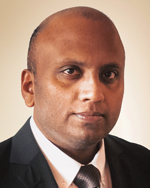 In that role, he is responsible for most capital and operations planning and project management functions at Peoples Gas. Kattappuram manages the team responsible for planning and executing the System Modernization Program (SMP). In addition to developing annual and three-year plans, Kattappuram supports the regulatory and discovery process associated with SMP. He also oversees teams that develop and manage the annual gas operations plan.

Immediately before joining Peoples Gas, Kattappuram was a senior manager in the Capital Projects and Infrastructure practice at PricewaterhouseCoopers.

Kattappuram has worked for gas and electric utilities across the nation and has expertise in large capital programs, regulatory strategy, compliance and design engineering. As a power systems engineer at Florida Power and Light, he played a critical role in the engineering and construction of high-voltage transmission lines. Kattappuram also worked as a power systems design engineer at Sargent & Lundy in Chicago and a research assistant for the United Nations Development Programme in New York.

Kattappuram earned a bachelor’s degree in electrical engineering from the University of South Alabama and a master’s degree in public policy and management with a focus in energy policy from Carnegie Mellon University.