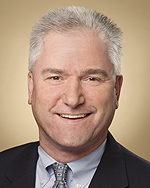 Larry Szumski was named vice president — customer relations in February 2019. In this role, he is responsible for the strategic, tactical and operational direction of customer relations for Peoples Gas and North Shore Gas. He also has responsibility for key customer accounts and new business development; energy efficiency and supplier management; relationships with key stakeholders, such as the Illinois Commerce Commission’s Consumer Services division; and customer engagement and satisfaction.

Prior to his current role, Szumski was director — integration and transformation, responsible for training, quality assurance and quality control across all WEC Energy Group utilities. In addition, he served as a member of the Program Management Office (PMO) for the Customer Service 2022 Program, with a focus on change management and organizational readiness.

Szumski joined Peoples Gas as a customer care consultant in 1989. He later acquired leadership skills as a team lead, executive supervisor and manager in Customer Care. He eventually moved to the Human Resources department, where he spent nearly five years as a senior strategist and later a strategy leader. In January 2012, he was appointed general manager of North Shore Gas and later that year became vice president — customer relations with the Integrys business support company.

Szumski earned a Bachelor of Arts degree in communications from Southern Illinois University, Carbondale, and a Master of Business Administration from Illinois Institute of Technology, Chicago.