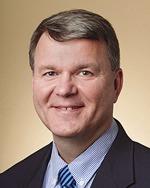 In this role, Gogan is responsible for the design, maintenance, operation and construction of electric distribution and transmission facilities, and in particular the Deliver the Future program at We Energies, Wisconsin Public Service and Upper Michigan Energy Resources. Deliver the Future is an effort to modernize the electric infrastructure through asset replacement, equipment hardening, undergrounding, advanced communications, sensors, substation upgrades and smart devices over a 10-year period. The program is rebuilding more than 600 miles of distribution lines annually, including the conversion of 100 miles of overhead distribution lines to underground and the replacement of all “active" line equipment with communications.

Gogan joined the company in 1989 as senior electrical engineer and was promoted to project manager and then to supervising engineer during the following decade. From 1999 to 2003, he served as project engineer, with additional responsibilities as major projects manager for engineering from 2002 to 2003. He was named operations manager — substation construction and maintenance in 2003; and manager — substation engineering, asset management and transmission support in 2007. Before his current role, Gogan served as manager — electric distribution engineering, asset management, reliability and planning from 2010 through 2019.

Before joining the company, Gogan was an electrical engineer with Sargent & Lundy for three years.

Gogan earned a Bachelor of Science in electrical engineering in 1986 and a Master of Business Administration in 2000 with a Beta Gamma Sigma honor, both from Marquette University. He is a registered professional engineer in Wisconsin and Illinois.

In 2020, Gogan was presented the “Outstanding Contributor to Reliability Award” from PA Consulting for his work on the Deliver the Future program.